This program is made possible with support provided by the
​New York State Council on the Arts
Lower Manhattan Cultural Council
Four Freedoms Park Conservancy
Dance/NYC and individual donations through our fiscal sponsor, New York Foundation for the Arts
​​Cuartetango Music & Dance is a theatrical chamber concert that incorporates all expressions of the Nuevo Tango art: music, dance, song and poetry. The show forms part of Leonardo Suarez Paz's PIAZZOLLA 100, a multidisciplinary performing arts project directed by Leonardo Suarez Paz,  a soloist of multiple Grammy winning albums and an artist who “possesses a unique spirit and is a virtuoso extraordinaire on the violin” (Wynton Marsalis, JALCO).

Cuartetango's instrumentation is atypical for Tango, making it the only group of its kind to perform the genre on Western Classical instruments for the past two decades. The addition of bandoneon and vocal numbers creates a new world of textures, rhythms, harmonies, and sonority that represents a continuation of the traditional Tango into Nuevo Tango that couples classical virtuosity with the authenticity, power and the unique urban ‘swing’ characteristic of Tango. Four tango dancers complete the multidisciplinary experience in a musically refined, sensual performance that is a "force 5 sensorial explosion" (The Day, CT), which has been featured at the Metropolitan Museum of Art,  on PBS and live at the Latin Grammy Awards, following a double nomination.  The art extends the legacy of Leonardo’s mentor, Astor Piazzolla, the Argentine born, and New York raised composer who revolutionized 21st century music.
Leonardo, creates across cultures and genres, continuing a family legacy of over 100 years in the genre, beginning with Gabino Ezeiza to Fernando Suarez Paz who was instrumental in creating the Nuevo Tango  alongside Piazzolla.  A member of the Orquesta Estable del Teatro Colon, Leonardo's work as a soloist includes the most distinguished tango orchestras such as those of  Mariano Mores, Horacio Salgan, Atilio Stampone, Osvaldo Berlingieri and the shows Tangox2 and Perfumes de Tango where he was also featured as a dancer. He was the soloist in both Broadway tango shows Forever Tango and Tango Argentino, with Placido Domingo, Ruben Blades, Carlos Franzetti, Patience Higgins, Jim Hall, Kenny Drew Jr., Steve Kuhn, Savion Glover and many others.   Leonardo “shows us how easily we can communicate across cultures if the desire and effort are there.”   (Wynton Marsalis, Artistic Director Jazz at Lincoln Center) 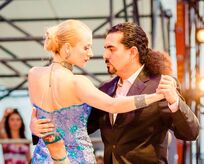 Social TANGO is back by popular demand!
​Come learn with us in a series of 4 special workshops that are a party
Pre-register to reserve your spot and get a 50% discount on classes -
for our concert attendees only!

​Leonardo Suarez Paz's PIAZZOLLA 100 and OUR MISSION
​
​Our mission is to further the genre of Nuevo Tango by elevating its artistic standards through live performances, recordings, publications and education, by demonstrating its evolution as an entire culture through every form of expression - music, dance, interdisciplinary work, visual art, literature and cinema. We celebrate Latin, African and European cultural heritages, the contributions of immigrants  and women to the genre, while relating its history to Buenos Aires and New York City and affording an opportunity for artists across generations, cultures, genres and disciplines to create new work
​and express through a renewed artistic idiom of cultural unity and inclusion.​