fiscal sponsor New York Foundation for the Arts
​
​​"TANGO - AN ENTIRE CULTURE"​​  "EL TANGO - UNA CULTURA "
- Horacio Ferrer
PIAZZOLLA 100 CALENDAR OF EVENTS
​Leonardo Suarez Paz’s Piazzolla 100 is an interdisciplinary performing arts project that showcases a groundbreaking new style, which draws on the common roots of Tango, Jazz and Classical Music, as shaped by the culture of African and European migration to the new world. Celebrating the centennial of Leonardo Suarez Paz’s mentor and family friend, Astor Piazzolla, who was born in Mar de Plata, Argentina in 1921 and grew up in New York City,  the project honors the legacy of this revolutionary composer by demonstrating the genre as a complex, evolving art form, while challenging  artistic and sociocultural constructs.

Our mission is to further the genre of Nuevo Tango by elevating its artistic standards through live performances, recordings, publications and education, by demonstrating its evolution as an entire culture through every form of expression - music, dance, interdisciplinary work, visual art, literature and cinema. We celebrate Latin, African and European cultural heritages, the contributions of immigrants  and women to the genre, while relating its history to Buenos Aires and New York City and affording an opportunity for artists across generations, cultures, genres and disciplines to create new work and express through a renewed artistic idiom of cultural unity and inclusion.
​ 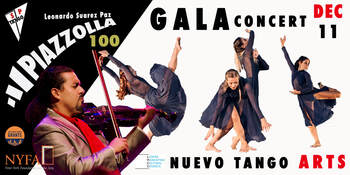 One of New York City's historic chapels is transformed into an elegant salon for a special evening of intimate chamber music, dance performance and art exhibit.  DETAILS
Dec 11 GALA TICKETS
​
Artistic Director and  “virtuoso extraordinaire,” Leonardo Suarez Paz, creates across cultures and genres, continuing a family legacy of over 100 years in the genre, beginning with Gabino Ezeiza to Fernando Suarez Paz who was instrumental in creating the Nuevo Tango  alongside Piazzolla.  A member of the Orquesta Estable del Teatro Colon, Leonardo's work as a soloist includes the most distinguished tango orchestras such as those of  Mariano Mores, Horacio Salgan, Atilio Stampone, Osvaldo Berlingieri and the shows Tangox2 and Perfumes de Tango where he was also featured as a dancer. He was the soloist in both Broadway tango shows Forever Tango and Tango Argentino, with Placido Domingo, Ruben Blades, Carlos Franzetti, Patience Higgins, Jim Hall, Kenny Drew Jr., Steve Kuhn, Savion Glover and many others.  Following in the footsteps of his mentors Astor Piazzolla and Horacio Ferrer, Leonardo “shows us how easily we can communicate across cultures if the desire and effort are there.”   (Wynton Marsalis, Artistic Director Jazz at Lincoln Center)

​Piazzolla 100 is unprecedented in format and will take place in New York City,  a city of great importance for Tango from Carlos Gardel in the 1930’s to Astor Piazzolla.  Throughout the year of Piazzolla's centennial we will be offering a variety of programs including a chamber music program, an interdisciplinary show, art exhibits,  film screenings, a literary night and a series of master classes and lectures, bringing together top artists from all disciplines who form a part of  the genre's renewal and highlights the importance of women in post Piazzolla Nuevo Tango.
CALENDAR OF EVENTS
Leonardo Suarez Paz’s Piazzolla 100  operates as a 501 c 3 as a project fiscally sponsored by the New York Foundation for the Arts
please consider making a tax deductible contribution toward the support of the project by making a tax deductible contribution
DONATE
PIAZZOLLA 100 TOURING PROGRAM