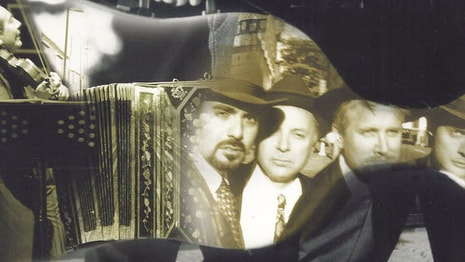 a historic collaboration featuring maestros of new tango
Masters of Nuevo Tango presents the world’s most celebrated artists in the history of Nuevo Tango who are alive today. These musicians have created styles, authored hundreds of compositions, conducted and performed as soloists with orchestras and symphonies worldwide. Astor Piazzolla, Frank Sinatra, Gidon Kremer, Lalo Schifrin, the Kronos Quartet, the Assad Brothers, Michel Legrand and Yo-Yo-Ma have continually sought their expertise and musicianship and have relied on the fierce, authentic sound of their Nuevo Tango when using tango influences in their own projects.

Directed by Leonardo Suarez Paz, "virtuoso extraordinaire on the violin" (Wynton Marsalis) star of multiple Grammy and Latin Grammy Awarded albums (Placido Domingo, Ruben Blades, Luis Miguel), who was mentored by the creators of Nuevo Tango -  Astor Piazzolla and Horacio Ferrer, this production is the first of its kind to bring together legendary masters  with the younger generations of artists.

The production premiered at the Teatro Pte. Alvear in Buenos Aires and provides a continuity to the original and real art of Nuevo Tango, featuring Piazzolla’s collaborator for over a decade - Fernando Suarez Paz, who plays with "delicious clarity and passion"  (NY Times) pianists Osvaldo Berlingieri and Nicolas Ledesma, the  "Brilliant" - (NY Times) bandononen player Nestor Marconi, Quinteto Suarez Paz guitarist Ricardo Lew, basis Daniel Falasca, Cuartetango string quartet and the celebrated singer Beatriz Suarez Paz, who offers an “exquisite interpretation” (El Tangauta) of Piazzolla’s works, bringing to life the words of two prolific geniuses, Ferrer and Borges. This project takes back the music of Piazzolla to it’s origin of style, deeply rooted in over a hundred years of tango’s history through the expertise of the most celebrated musicians of Nuevo Tango.

Master of Nuevo Tango is a registered trademark
13 artists
available for festivals, world, jazz, crossover, new music series and special programs
Leonardo Suarez Paz, "virtuoso extraordinaire on the violin" (Wynton Marsalis) star of multiple Grammy and Latin Grammy Awarded albums (Placido Domingo, Ruben Blades, Luis Miguel), was born into a cradle of tango and grew up among its stars in a time of the tango revolution.  His mentors and family friends - Astor Piazzolla, Horacio Ferrer and his father, Fernando Suarez Paz passed along to him their vision and their dreams. His journey took him from his artistic debut at the age of 6 as a singer, to becoming the youngest member of the Teatro Colon Opera House at age 16 as a violinist, to plying as a soloist and dancing with all of the major tango stars such as Mariano Mores, Horacio Salgan, Atilio Stampone to playing jazz with with Jim Hall, Kenny Drew Jr., Stanley Jordan, Steve Kuhn and Savion Glover, to arranging for the Jazz at Lincoln Center Orchestra with Wynton Marsalis. He embodies all that is part of this complex genre today, inspired by everything that surrounded him since childhood, he is the music, the song, the poetry and the dance of Buenos Aires, the past in his heart and and one foot in the future, he is Leonardo Suarez Paz.  ​